MVP Strategies is an organization that provides sexual harassment and gender violence prevention training to a variety of clients in the public and private sectors.

We utilize the concepts and curricular materials first developed in the pioneering Mentors in Violence Prevention (MVP) program. 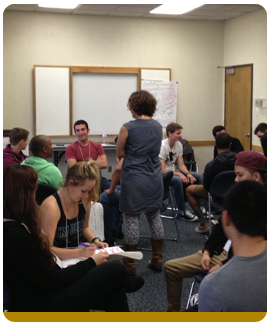 MVP is a mixed-gender, multi-racial prevention program that was the first large-scale attempt to apply the bystander approach to issues of sexual harassment, sexual assault and relationship abuse prevention. MVP also frames gender violence prevention as a leadership issue for administrators, faculty and students at all levels of the educational system.

The leadership and bystander focus allows the issues of gender violence prevention to be framed within a context of inclusion and responsibility for everyone.

MVP has been implemented in the U.S. and around the world across myriad populations in high schools, colleges and universities, sports organizations, all branches of the United States military services, and in small and large companies.

While MVP is mixed-gender, MVP has had tremendous and historic success working with groups and institutions that have been traditionally difficult to engage in gender violence prevention, especially male-dominated institutions such as men’s athletic programs, fraternities, military organizations, and traditionally male-dominated industries and workplaces.

In 1993, Dr. Jackson Katz and his colleagues at Northeastern University’s Center for the Study of Sport in Society developed MVP as a sports culture initiative. By design, the program quickly expanded to engage general populations of students and professionals in college, high school, the military, and a variety of organizations in the public and private sectors.

In the years since, the multiracial, mixed-gender MVP Model has been widely influential in the development and operation of a range of gender violence prevention initiatives in the U.S. and abroad.

MVP Strategies carries on the work of MVP in numerous educational settings. We do presentations and workshops for students in college and high school. We conduct leadership training for student leaders as well as educational staff and administrators.

MVP Strategies introduced bystander training to the United States Department of Defense, and we have been instrumental in helping both the US and Australian militaries develop system-wide prevention programming. We conduct bystander-focused leadership trainings for professionals in a variety of government agencies, community organizations, and small and large corporations. We also consult with clients about how best to integrate prevention strategies.

From the locker room to the classroom & beyond

MVP received its initial funding through a U.S. Department of Education grant, awarded to develop a replicable model for gender violence prevention education that utilized the social status of male college and high school student-athletes and other student leaders.

But MVP did not originate in organized athletics because of the problems in that sub-culture. Rather, the impetus for MVP was proactive and positive, and focused on the potential leadership of successful male (and female) student-athletes and coaches.

From the beginning, MVP intended to create something much bigger than a program targeted at student-athletes. We wanted to use sports culture to catalyze significantly increased involvement of men in college and school-based gender violence prevention efforts.

A strong partnership between the genders

The MVP approach to prevention education has always included a strong emphasis on leadership training—for everyone across the gender, sexual, ethnic, and racial spectrum.

From its inception, MVP has sought to expand the number of men willing to take a stand to prevent sexual harassment, sexual assault and relationship abuse. MVP has been especially effective at delivering its leadership message to men in the dominant and multiracial cultures of athletics, fraternities and the military. The program both challenges and inspires them to partner with women to reduce gender violence.

But since its second year, MVP has been a mixed-gender program. MVP educates and trains men and women. MVP sessions with women feature robust and lively conversations that range from discussions about gender and sexual norms in female peer cultures to the role of women as empowered bystanders. For more than a quarter-century, we have supported women’s leadership and helped develop a generation with the skills necessary to counteract sexism and violence.

Everything is fair game for discussion in the highly interactive MVP dialogues: the difference between prevention and “risk reduction” strategies in educational institutions and private sector workplaces; the pleasures and perils of hook-up culture; victim-blaming; the role of alcohol in sexual assault; the symbiotic relationship between sexism and heterosexism; the many intersections of race, sex and gender; harassment and abuse directed toward members of LGBTQ communities, and ways to prevent it; and the role of women as bystanders when women are the perpetrators of harassment or abuse.