MVP Strategies Around the World

Sexual violence and other forms of gender-based violence are deeply entrenched global problems. 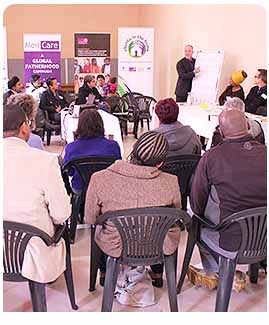 In the current zeitgeist of prevention, MVP Strategies offers the effective institutional response that activists, educators, government officials, and other leaders are demanding.

As a result, MVP Strategies has a growing presence around the world. Three aspects of MVP Strategies are particularly relevant and attractive for a multitude of societies.

MVP Strategies has worked extensively in Canada over the past twenty years, and our work there is expanding. MVP Strategies Director Jackson Katz has given lectures and conducted professional trainings in eight Canadian provinces, directly reaching tens of thousands of majority and First Nations people in urban, suburban, and rural communities. In addition, MVP Strategies has been part of a number of other Canadian initiatives.

MVP-Scotland is an ongoing successful collaboration between MVP Strategies, the Violence Reduction Unit (VRU) of the Scottish police, and various Scottish educational authorities. Under the direction of (now retired) Chief Inspector Graham Goulden, the national anti-violence campaign coordinator of the VRU, a version of MVP customized to the Scottish context was initially implemented and evaluated in three schools in Glasgow and Edinburgh in 2011. In 2012, four additional schools began implementing the MVP Program. Preliminary program results have been positive and promising.

In 2013, with further funding from the Scottish government, the VRU began working with all Local Authorities involved in the program to provide a sustainable and scalable model for other high schools in these areas to use the MVP Program. Currently, 25 local authority areas run MVP in the high schools, making it the country’s largest anti-violence schools programme.

Moreover, the Police Service of Scotland (PSOS) in interested in MVP. Formed in 2013, the PSOS combines the eight Scottish police forces into one force. Key priorities for the PSOS include domestic abuse, rape, and sexual assault. MVP offers a tool for these issues to be discussed within educational contexts, with the potential to be the delivery model for prevention in high schools across Scotland.

Graham Goulden notes, “The MVP Program clearly provides an opportunity to embed within Scottish high schools a sustainable approach which will support health and well-being and positive relationships, as well as exploring the links to different forms of abuse and violence. Whilst the majority of young people don’t bully or abuse, they possess the power to influence peers and provide a positive climate in which these behaviors don’t exist.”

MVP Strategies began its work in Australia in 2006, conducting trainings with personnel from across the Australian Football League (AFL), as part of their groundbreaking Respect and Responsibility campaign. We have been operating systematically in Australia since 2010, when Griffith University’s Violence Research and Prevention Program introduced the program to address a shortage of primary prevention work focused on gender-based violence. More specifically, the program sought to communicate the potential leadership and influence bystanders can have in addressing, confronting and preventing men’s violence against women.

MVP Australia has worked in every state and territory in the country, in both urban and rural settings with a variety of groups including social service providers, high school and university students and staff, local councils, and service and social justice organizations. We have trained members of the Australian Army at all levels of rank since 2012.

In 2015, MVP expects to offer a curriculum for Muslim populations across the country.

MVP Strategies has developed a presence in a number of other countries. For example, MVP Strategies has an ongoing partnership with the Stockholm, Sweden-based organization Men for Gender Equality. And in 2014, MVP Strategies Founder/Director Jackson Katz, on a trip sponsored by the U.S. Department of State, brought the MVP message to South Africa in a series of talks, workshops, and high-level meetings in Cape Town, Johannesburg, Bloemfontein, Pretoria, and Soweto.

A major force in the gender violence prevention field

As the field expands and more educational institutions, community organizations, NGOs, and local, state, and national governments in the Global North and South prioritize this critical work, MVP Strategies will continue to provide ideas, energy, and leadership in the ongoing non-violent struggle for social change. Our goal is to contribute to the proliferating initiatives around the world that seek to significantly reduce gender-based violence.