Since the mid-1990s, MVP Strategies has played a major role in the effort to implement gender violence prevention programming in the U.S. military.

MVP Strategies is responsible for introducing bystander intervention to the Department of Defense, and for helping to define sexual assault and domestic violence prevention as military leadership issues. 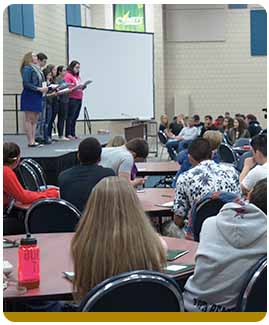 MVP Strategies has also played a central role in designing curricular materials that are currently used throughout DoD prevention programming.

MVP Strategies and its Founder & President Jackson Katz, Ph.D., provide a range of gender violence prevention training, presentations and consulting services to all branches of the United States Armed Forces, as well as select militaries around the world.

List of MVP Strategies accomplishments in the U.S. military:

In 1997, MVP-Marine Corps (MVP-MC) became the first system-wide prevention program in the DoD. It was deemed a “sergeants major initiative” and focused on junior and senior enlisted leadership. For nearly a decade, a series of MVP-MC trainings were regularly held in Okinawa, K-Bay, Camp Pendleton, 29 Palms, Camp Lejeune, and Quantico. MVP customized the MVP playbook to Marine-specific scenarios, a process that has been replicated with the other major services.

Starting in 2000, MVP Strategies personnel worked with instructors at Marine Corps University to develop an MVP training module that was utilized for approximately seven years as a block of instruction at the SNCO academies. Academy instructors were trained by MVP Strategies trainers to deliver the program to Marines; approximately 600 Marines were trained as trainers. Estimates of how many Marines were trained by MVP-USMC trainers range from 15,000 minimally to as many as 21,000.

Most of this training happened at the six Staff NCO Academies. While 17,000 to 23,000 Marines exposed to MVP-USMC sounds like a lot, it is a small fraction of the Marine Corps, (10% to 13% based on a total Marine Corps population of 171,000), and this took place over a ten-year period.

In addition, MVP Strategies personnel conducted multiple trainings with instructors at Marine Corps Recruit Depot-San Diego and Parris Island, and presented at numerous E-8 symposia and other leadership trainings from 1997-2008.

Since 2010, MVP Strategies has been a key component of the Navy-wide bystander intervention training that has been delivered at Great Lakes and other locations. MVP has conducted trainings at several naval installations since 1999. The first MVP pilot training in the Navy was held in 2000 at Naval Region Northwest in Bremerton, Washington. MVP Strategies trainers have presented at Navy conferences in Washington, D.C., Pearl Harbor, San Diego, and elsewhere.

MVP Strategies personnel have served as consultants and subject matter experts to the Air Force since the mid-2000s. MVP Strategies Founder and President Jackson Katz, Ph.D. and other MVP Strategies trainers were instrumental in designing the curricular materials for the Air Force Bystander Intervention Training (BIT). They also were an essential part of the team that trained Air Force trainers to disseminate the training across the Air Force, a process that continues to this day.

MVP Strategies personnel have presented at numerous Air Force bases in CONUS and OCONUS, including a series of trainings for senior and junior commanders and enlisted leadership at Air Force bases in Europe. In 2011, MVP Strategies personnel trained students at the Air Force Academy prep school in Colorado Springs, CO. In 2014, they conducted bystander/leadership trainings with cadet student-athletes and student-athlete leaders at the Academy.

Since the early 2000s, MVP Strategies trainers have delivered presentations and conducted trainings for tens of thousands of uniformed Army and civilian personnel at dozens of bases in the U.S. and overseas. The presentations are generally large-room awareness-raising sessions that introduce basic concepts of men’s and women’s leadership in gender violence prevention, the basics of the bystander approach, and essential concepts of critical media literacy. The trainings include professional development for uniformed military and civilian employees, as well as MVP Strategies trainings of trainers.

In addition to work in CONUS, in 2009 MVP Strategies trainers delivered intensive sexual assault prevention leadership training for approximately 92 US Army Soldiers at three Forward Operating Bases (FOB) in the Iraqi Theater: Camp Adder (MND-S) in Tallil, Camp Victory in Baghdad, and Joint Base Balad (JBB).MVP Strategies personnel delivered a two-day train-the-trainer program at each FOB for approximately 30 soldiers per group. The training groups consisted of female and male soldiers who had been designated as outstanding young leaders. The group spent equal amounts of time in single-gender and mixed gender settings. In preparation for the trainings, MVP Strategies personnel, together with Army officials in the field, developed customized materials for soldiers, both in-theater, post-deployment, and garrison-based.

In addition, for years MVP Strategies personnel have presented at Army conferences and summits in CONUS and OCONUS, and at West Point.