MVP in the News

Open the elevator on domestic abuse 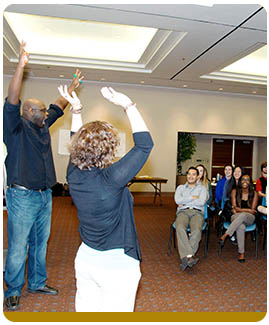 Psychologist Ron Slaby was driving around this week, listening to sports talk radio, where the subject, of course, was Ray Rice. The NFL had just announced that it was beefing up its training around domestic violence. The radio host was scoffing.

Slaby should know: He has spent a long career studying violence prevention, at Harvard and Boston Children’s Hospital. He pioneered the idea of bystander intervention. He helped develop programs used in schools and in the military, teaching men not just how to act in their own relationships, but how to keep their peers from being violent.

In a way, we’ve all gotten an education this week, a slow-mo, step-by-step lesson in how domestic violence happens and how hard it is to escape. There is the video of Ray Rice in an elevator, hitting his then-fiancee so hard she lost consciousness, dragging her limp body out the door. The painful Instagram response of Janay Palmer Rice, decrying her husband’s suspension from the league, drawing criticism of her own. The Twitter hash tags #Why Stayed and #Why Left, a torrent of heartbreaking personal stories, proving that the answers aren’t simple.

What we ought to be asking, Slaby suggests, is, “What would I have done if I were there?

And that dynamic can work on the ground, said Nancy Robinson, the executive director of Operation LIPSTICK, a Boston-based program that enlists women’s help in stopping gun trafficking in inner cities. At social events and leadership training meetings, women learn that guns they buy or hide – because their boyfriends or brothers or grandsons have asked, or demanded – could wind up used against them or their neighbors. They meet other women who have said “no.” They find the strength to do the same.

“It’s all peer-to-peer organizing and word of mouth,” Robinson told me this week. “It’s a lot like Mothers Against Drunk Driving. It’s changing the culture. Right now, there’s a norm that says it’s OK to do this. And these women are changing the norm.”

This is what the NFL has to do: Change the way players think about domestic violence and not just out of fear of a six-game suspension. Slaby told me about one program he helped to develop, called “MVP,” for Mentors in Violence Prevention. It began as a project by one of his graduate students. Now, it operates out of Northeastern University’s Center for the Study of Sport in Society. And it uses sports as both a metaphor and a jumping-off point.

Training for a college team begins with group discussion, led by a mentor everyone respects: A beloved former player, a returning star. He asks the trainees to visualize a woman they love, being threatened or attacked. He asks them to imagine another guy standing there, watching, doing nothing.

No one thinks he’ll be that guy. But the mentor asks for proof. “Pick your play,” he tells them – because if you don’t have a playbook, the moment will pass. He walks through real-life scenarios. He talks out the possibilities. He trains them to think ahead and to know what they don’t want to be.

A zero-tolerance policy for violence is “just not enough,” Slaby said. And if all we talk about are consequences, then the violence just moves to “the elevator behind closed doors.”

That’s what happened with Ray Rice. A punch was thrown. A player got punished, slightly. Then is all blew up. What would Rice’s teammates have done, or the Baltimore Ravens ownership, or Roger Goodell, if they’d actually had a play in mind?

The (Toronto) Globe and Mail

Allegations of assault against former CBC radio personality Jian Ghomeshi are highlighting the need for men to speak up when other men behave inappropriately.

One emerging program so far introduced at a handful of Canadian universities – developed over decades in the United States – helps men intervene in spite of social norms to stay silent and trains friends of women who have been assaulted on how to respond. As the number of allegations against Mr. Ghomeshi have risen, many women and some men have written articles on social media revealing that they had been warned about going on dates with Mr. Ghomeshi, but did not feel they were in a position to talk to him about it.

Getting men to step in is crucial, researchers say. That’s where “bystander intervention” programs come in.

“The whole point of the program is to get men who are not themselves abusive to play a role in changing the norms in male peer culture and challenge and interrupt abusive behaviours by their peers,” said Jackson Katz, who is the co-founder of the Mentors in Violence Prevention (MVP) program, who introduced the “bystander” approach to sexual assault as a way to put the focus on men’s role in stopping it.

He likens silence by men on sexual assault or harassment as similar to white people not challenging racism by peers. “The core of the teaching is about responsibility and social responsibility … if you’re a man and you are silent in the face of abusive behaviour, your silence is a form of consent and complicity, your silence is giving consent to that behaviour.”

The University of Windsor has gone further than any other campus in Canada in adopting bystander training, introducing a for-credit semester course for peer counsellors who then deliver three-hour workshops to other students. Fifty per cent of spots in the course at Windsor are reserved for men. McGill University and St. Mary’s have also included bystander training in their orientation and consent programs and McGill will introduce a longer-term program this winter.

Research on the impact of the program at Windsor by professors Charlene Senn and Anne Forrest, who led the initiative, has found that students who have taken the courses say they are more likely and feel better equipped to intervene when they encounter harassment or sexually inappropriate situations than those who have not participated. Similar findings from the University of New Hampshire, where a bystander-based program was developed over 20 years ago, have led to its adoption across American campuses.

“One of the key things in bystander education is to help people understand a continuum of inappropriate sexual behaviour. People imagine they are walking down the street and they imagine a man on top of a woman and that is so rare because stranger assault is so rare,” Dr. Senn said.

Bystander intervention is also designed to help students know what to do when a friend says they have been assaulted.

Alicia Raimundo, a recent university graduate who speaks on mental health at campuses across the country echoed Toronto Police Chief Bill Blair who earlier this week had said the police will not pursue any of the women who have anonymously alleged they were violently assaulted by Mr. Ghomeshi. Friday night, police said they are investigating after two women contacted them. Mr. Ghomeshi has not been charged with any crime.

Ms. Raimundo was surprised when a counsellor immediately asked her if she wants to go to the police after she spoke about her own sexual assault. “If you have a hard time telling one person, imagine explaining why your assault is real in front of 12 strangers. … People who weren’t involved in the Ghomeshi case were angry, people get angry for you and tell you what you need but I think they need to allow the person to decide,” Ms. Raimundo said.

That’s where male peers can move from being bystanders to intervenors.

“There are subtle pressures on men to conform … men make a calculation not to say something because they know there are potential consequences, being seen as not one of the guys, being seen as getting into another guy’s business,” Dr. Katz said, adding that in the Ghomeshi case, the former Q host’s power would be among the calculations of colleagues.

“We don’t have to come up with new ideas on how to engage with this, we have to institutionalize the programs that work.”