MVP introduced the bystander approach to gender violence prevention in the early 1990s. 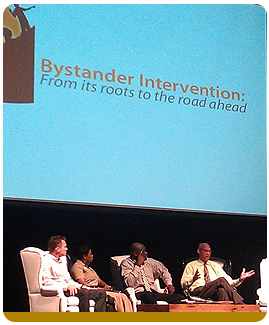 Among the most innovative and influential programs in the field, MVP’s approach has provided the conceptual foundation for numerous other programs that focus on the role of bystanders.

In 1993, Dr. Jackson Katz and his colleagues at Northeastern University’s Center for the Study of Sport in Society were seeking to develop a pedagogical model that could provide critical information and refute common rape and battering myths, but in a way that would, in the words of Futures Without Violence founder Esta Soler, “invite, not indict” men and engage them in critical dialogue.

Among the many limitations of this narrow approach was that most men did not see themselves as potential perpetrators—and as a result shut down and felt unsafe to engage honestly in critical dialogue. But when men (and women) were positioned as friends, family members, teammates, classmates, colleagues, and co-workers of women who were or might one day be abused, or of men who were abusive or perhaps going down that path, they fell into the virtually universal category of “bystander.” This helped draw men into the conversation in a constructive fashion.

Far beyond the narrow abuser-victim model

The MVP Model for gender violence prevention focuses on young men not as perpetrators or potential perpetrators, but as empowered bystanders who can confront abusive peers and support abused ones. Likewise, the Model focuses on young women not as victims or potential targets of harassment, rape, and abuse, but as empowered bystanders who can support abused peers and confront abusive ones.

In addition, MVP provides all students with tools to interrupt harassment and abuse targeted toward LGBTQ students, as well as students of color and other marginalized populations.

The goal of this approach is not simply to teach people how to intervene at the scene of an assault. It is a strategy to change social norms in peer cultures at all levels — from high school and middle school students up through adults of all ages. To do this, the MVP Model encourages people to speak out in the face of abusive behavior before, during, or after an incident. This helps to create a peer culture where sexist abuse is seen as uncool and unacceptable. For men in particular, this abuse comes to be seen as a transgression against—rather than an enactment of—the social norms of masculinity.

The roots of the approach

MVP’s educational philosophy is rooted in the basic social justice teaching that everyone has a role to play in challenging and changing social norms that contribute to abusive behaviors — especially members of dominant or privileged groups. In the early 1990s, MVP combined this social justice approach with the then-emerging work of Dr. Ron Slaby and his colleagues at the Harvard Graduate School of Education and Education Development Center in Newton, Massachusetts.

Slaby et. al. had been developing initiatives that focused on the “bystander” in middle school bullying prevention. Looking beyond the limited bully vs. bullied model, this approach sought to engage people around both the kid doing the bullying and the kid experiencing it. This mobilized everyone in a given peer culture in efforts to stop the bullying, hold the perpetrator accountable for his or her behavior, and support the victim.

MVP introduced this paradigm-shifting perspective to the gender violence prevention field, and has been leading the way ever since.

To learn more about the MVP Model or to schedule a training session, please contact us.

What is a bystander?

In the MVP Model, a bystander is defined as a family member, friend, classmate, teammate, coworker—anyone who has a family, school, social, or professional relationship with someone who might in some way be abusive or experiencing abuse. “Bystander” also refers to anyone in a larger peer culture, whether or not they are present at the time of a specific incident.

The goal is to help people move from being passive bystanders to being empowered and active ones, and thus contribute to a change in the social acceptability of harassment, abuse or violence.