Since the program’s inception, MVP trainings have featured honest, lively debates that center around social norms of masculinity and femininity, sex and gender 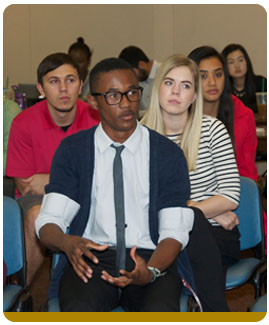 –inside and outside of traditional binaries — and how these can play a role in perpetrating–or condoning–gender violence.

For example, we discuss the objectification of women in media, including pornography, and ask provocative questions about whether and/or how this objectification might contribute to harassment and abuse.

We also talk openly and honestly with young men about how pressures to be “one of the guys” can affect their willingness to intervene and interrupt abusive behaviors by their peers.

MVP Strategies trainings employ a range of classic exercises that highlight the power of gender norms to shape behaviors. For example, we have long used the Act Like a Man/Woman Box, (created by the Oakland Men’s Project in the late 1970s), and Sexual Assault in the Daily Routine, which examines the steps most women (but very few men) take on a daily basis to avoid sexual violence

We don’t tell people how to think about all of these things. Rather, we create space for dialogue that allows people to hear and express a range of viewpoints that can deepen their understanding, and increase the likelihood that they will be willing to act as empowered bystanders in their peer cultures.

Why do some men make it clear that they won’t accept abusive behavior from their peers, while others remain silent? How is the silence of peers understood by abusers? What are some of the informal policing mechanisms in male peer culture that keep young men from speaking out about these issues? What are similar mechanisms in female culture? What message is conveyed to victims when an abuser’s friends don’t confront him? How do fears, misperceptions and anxieties about people who fall outside the gender and sexual binaries factor into the dynamics that contribute to sexual assault and relationship abuse?